No Cmdlets loaded after using the MSI

So I thought I might need to Install PowerShell Universal into the ISE as well but I get the following error:

I am using the following settings for my Dashboard:

I am going to try to follow the steps to set up VSCode and see if I can get it to work that way.

I feel like I must have missed something in my setup, anyone have any ideas?

It looks the same in VScode 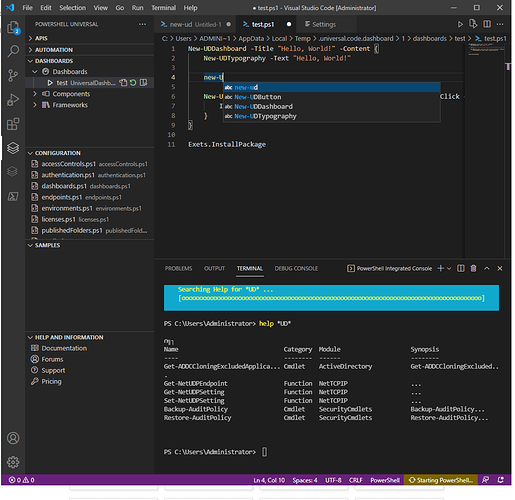 This seems like an error with the PowerShell Gallery. Since it can’t resolve the gallery, it won’t be able ot install the module.

Try installing the latest UD module to get help for those components.

This got me to a new issue where it looked like UniversalDashboard.GridLayout was not installed.

So I installed it through the ISE

After rebooting the error is still there and it looks like PSUniversal can’t see UniversalDashboard.GridLayout

I think it is mostly the “Tls12” issue so I will try to set up PSUniversal on a different OS and see if that solves the issues, I’ll let you know how I go, but if there is a way to get it working on this OS I would like to give it a try.