Hi everyone! I just purchased PowerShell Pro Tools for VS Code and so far I am excited.
I have noticed something’s that may be more on me but I wanted to ask anyways.

Thank you for the reply Adam.

In regards back to 2 - Since the form auto generates the common params, is there a way to remove them from the created view as a temp solution? I tried deleting and when that didn’t seem to work, setting the visible flag to ‘False’ but it didn’t seem to stick either.

It’s possible but probably pretty annoying. I committed a fix for this and will release version 5.12.11 to the marketplace in an hour or so. It’ll include the latest version of PSScriptPad as well.

Awesome! I’ll check in a bit then.
Thanks for everything Adam! I appreciate it!

Just wanted to give an update:

Just to give some context: I was hoping to build a GUI based IIS App Pool bounce tool. I already have created this to be on demand for myself but I figured, lets up the ante.

Here is a picture. The only changes I made where the locations of the text boxes, title bar, and the additional giant text box. 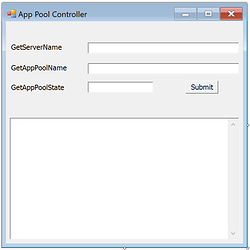 FF to about 630PM (work was busy today), I was able to get the code to accept Arrays and output into the giant text box. The information in the image is just filler data to show concept. It works in case you were wondering. 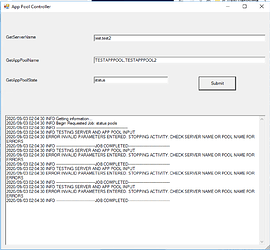 All in all, Thank you Adam (and team) for the quick turnaround. I was not expecting such speed! I cant wait to continue building things and using Pro Tools!