Automation Triggers running twice, and when they are not supposed to

Let’s say I have 3 automation scripts with jobs, where each are set to Error Action Stop, and I have a trigger set to trigger on Event Job Failed, in the default environment (triggerA). TriggerA makes use of the $job parameter when a script job fails and triggers it, then sends an alert email that a job failed and gives me the name and id of the failed job.

The issue is that it both works and does not work. When any job fails, it triggers TriggerA and I get the alert email with values for $job. However, it triggers TriggerA a second time and the email I get does not have any data listed for the values of $job. It’s somehow triggering TriggerA 2 times when any job fails, and I get 2 emails (one with $job data and another without $job data).

Any ideas on why any failed job is triggering TriggerA 2 times, and why one email has $job data where the other does not?

To take it a step further; let’s say I create another trigger (triggerB). TriggerB will clear a PSU cache variable, then send an email saying the cache was cleared. TriggerB is set to Event Job Failed, in the default environment, and I set the script to script2.

What’s happening is on any job failure both triggerA and triggerB are being triggered 2 times.

Any ideas on why any job failure triggers both triggers; even though one of them is set to only trigger when script2 fails?

This sounds like a bug. I’ll open an issue for it and let you know if I need any more info. I can reproduce this. 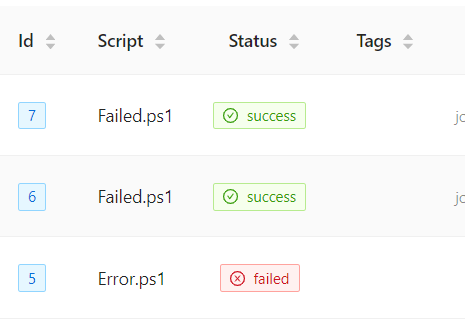 Roger that! Thanks for looking into it