I was able to stand-up a Windows 2016 Server VM in Azure, then follow the instructions here:
https://docs.ironmansoftware.com/config/hosting-iis

Worked great for me!

I’ve messed around with hosting PSU as an Azure WebApp itself (IIS in Azure) but have had limited success. The docker container just worked for me.

I was able to pull it if I use the Linux version (latest) but if I try the Windows version of Docker, it fails.
(ironmansoftware/universal:1.3.0-windowsservercore-1909)
Did not try others windows versions yet. 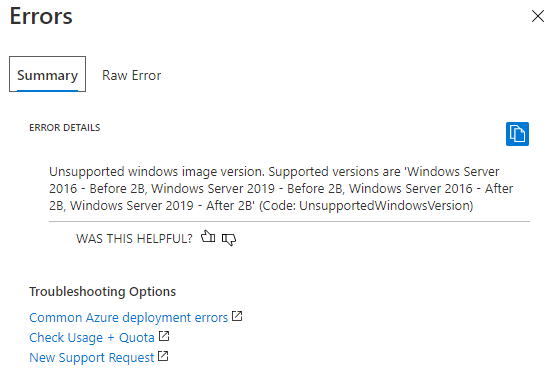 Hmmm. I wonder if we need a full (not server core) version base image.

Looks like it, I am now pulling the “ironmansoftware/universal:preview”, and this does not fail when you start to deploy it, the core version fails immediately.
It succeeded deployment, but looks like it fails to start up.
Linux version started up.

Well, that was easier than expected…
Linux version hosted as an web app: 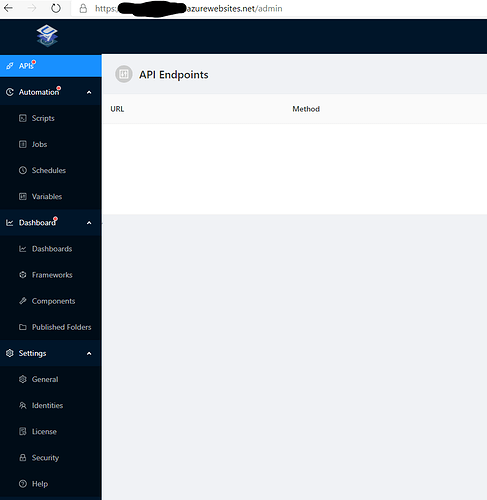 Given that this is the linux version, I only have PowerShell version 7 available, if the Windows docker image would have worked, I would have 5.x and 7 available?

Yep. I’ll build and push a new docker image tomorrow based on the full Windows PowerShell image so you can have access to both 5 and 7.

Im hitting F5 on the docker page but no updates

If I had a working Windows install, I could start to host my dashboard in Azure.

One question if we host it like this, and there is an update to the image, the license will still be valid if we do a new pull on the image ?

I have not worked much with Docker but starting with Azure DevOps now so having the dashboard as a solution there would be nice.

Sorry. I ran into a snag. The problem is that the PowerShell team does not produce anything but Server Core and Nano Server builds. This means that we would have to produce our own full server build with the PowerShell 7 binaries.

Is PowerShell 7 important for you? We could produce a Windows image that just had Windows PowerShell on it.

The license will still work between pulls as long as you configure persistence correctly for your docker container.

This page provides installation and configuration information for Docker.

For the tasks I run I do not need PowerShell 7. I just connect to Azure with Graph(webrequest), AzureAD and Exchange Online module.

Does the credential vault within PowerShell Universal work in Azure? (If you have tested that.) Linux one does not, but I guess use KeyVault or other services to host the credentials in Azure.

Ok. I should be able to put together an image using a stock Windows Server as the base.

The credential storage in PSU uses the Secret Management module by the PS Team which doesn’t yet support Linux.

Started using the docker image now, and it starts up, and I have been able to add the modules I need for my dashboard, so I will have to migrate my dashboard as well now, but looks good for now here

Using the Core version for Windows by the way. Does not look like I need the full image now that it works

A challenge is to get the image persistant, as I store the variables.
If I run the dockerfile configuration from: https://docs.ironmansoftware.com/getting-started/docker#persistent-data I get the following error.

(My environment is a Windows Machine, my Docker is set to use Windows containers)

Only thing changed is the image used in FROM.

I’ll update the docs for this but I think we need to make these adjustments since it’s a windows container.

Here is my Dockerfile for now (Windows image, windows machine, make sure your Dockerfile is in capital letter) if anyone would like to have a windows example.
This installs the modules I need to create a new image.

FROM ironmansoftware/universal:1.3.1-windowsservercore-1809
LABEL description=“Universal - The ultimate platform for building web-based IT Tools”

this is the port to access the image on. 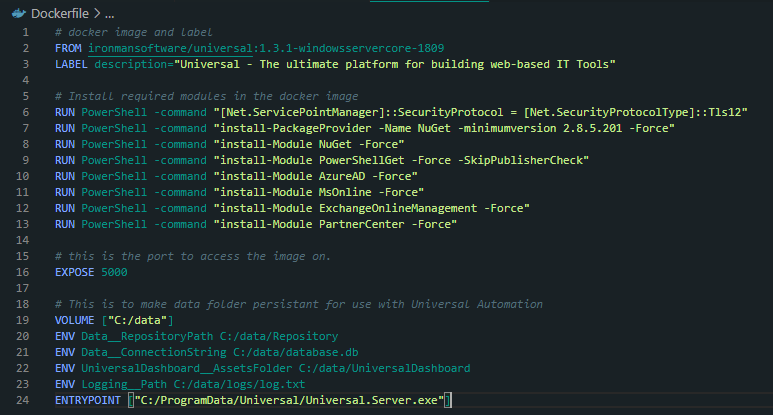 Getting some errors when I import the modules within Universal Automation, and when trying to run the commands as well from CLI, so Im trying the “non core” image now.
Same error with the full image.
If I install the modules manually from the CLI in Docker, it works, but using the Dockerfile installation, the modules are installed, and present, but gives an error (not found a solution for this yet)

This error was because it tried to open up the modern authentication window. (good help from blckpythn from Discord there

Any tip on how to read credentials from the buitlinlocalvault from the dashboard?
My script works fine from a local machine, but not in the docker image (I have added the credentials there, and can read them from UA scripts, but unable to call them from the Dashboard itself.)

Neither of these works. Tried to install the docker container with the Microsoft.PowerShell.SecretManagement module as well, but no luck.

That’s very weird. I would assume it should be the same context.

Can you open the dashboard console (on the info page for the dashboard) and run Get-SecretInfo to see if it returns any secrets?

Its not a licensed version yet ;( but now that I am getting closer to hosting it in Azure, we will buy a license for it, it has just been a “POC” for now here.

Unfortunately the secret variables are visible but the vault is not in a persistent state, so they need to be added again after a reboot. Looking to use Keyvault instead from within Azure.