Hey its me again lol

I feel like this something really trivial but we use a variable pretty much platform wide called $HostName which as you would guess is the FQDN of the server such as “https://psu.com”

To make this a bit dynamic I configured it as such 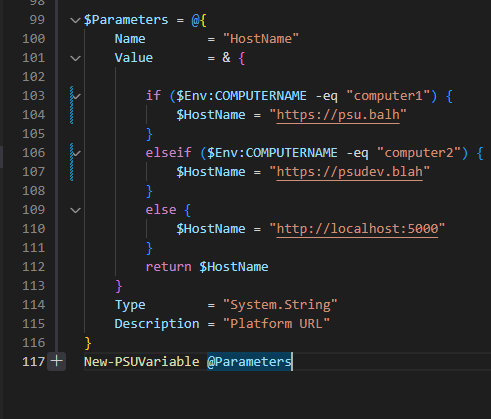 I attempted to use initialize.ps1 but using PSU cmdlets such as new-psuvariable requires authentication and I dont really want to hardcode app tokens in code. Maybe we could leverage a keyvault for this but i was hoping there was a variable that I just dont know about somewhere I can use to get the URL of the server…

Could you use the system cache or something like that?

I get the following error when using that cmdlet

You could try integrated mode so it doesn’t need to connect.

Having a dynamic value for variables would be cool though. Could provide a script block that gets executed when the variable is read during startup.

Another thing is you could use the new PSU region. Put this at the top of your variables.ps1.

@adam I tired that and I keep getting the following

Note im running this through the initialize.ps1.

Ah, ok. I know initialize is kinda different than the rest of the scripts we run in PSU.

I do think the PSUHeader strategy may work. You’d do that in variables.ps1.

I do think the PSUHeader strateg

This is what we are going to go with for the time being.