I wanna get ahead of the long process of ordering a database for V3, but I’m not finding anything regarding requirements for the server in the docs. specs is easily changed, but collation can be a pain as I understand.

The specs don’t matter too much and we aren’t taking advantage of any fancy SQL features so you should be able to us any supported MS SQL version. SQL express has a 2 GB limit so you will need to take than in to consideration but may be good for testing. If you groom more aggressively (especially with job data), you can comfortably fit in 2 GB.

As for collation, we use the default SQL_Latin1_General_CP1_CI_AS collation. The big thing here is that it doesn’t do character expansion on strings so sorting and comparison work as expected.

Rather than with something like Latin1_General_CI_AS which does character expansion rather than using string literals. 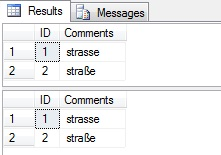 We specify this for the database during creation so it won’t inherit it from the server settings.

I’ll make sure this info gets into the docs.